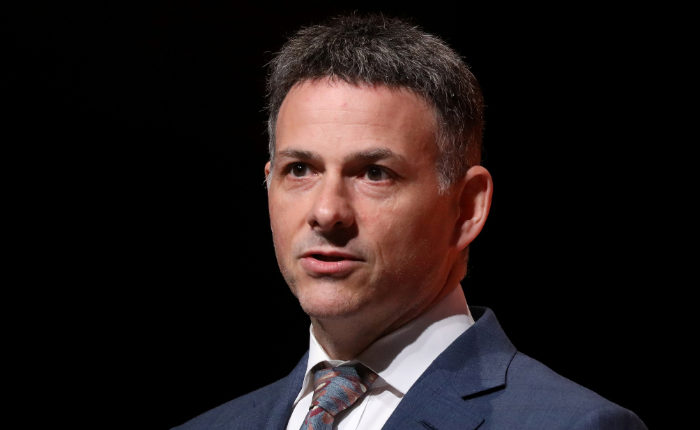 David Einhorn is a major US investor, president and co-founder of Greenlight Capital, a hedge fund created in 1996, which in a few years has become of primary importance in the diverse landscape of Wall Street.

The investment strategies used by Einhorn have always stood out. He is not a trader who follows the crowd, far from it. Often his operations go against the grain and in the course of his career he has become famous for predicting the collapse of Lehman Brothers before the famous financial crisis.

Recently he has been heavily criticized for his insistence on his downside positions against some large American companies, but we will talk about this later in our guide.

If you want to analyze David Einhorn’s operations and portfolio, we recommend opening a Demo account on eToro, so you can simulate his financial investments without running any risk.

Who is David Einhorn?

David Einhorn’s career started with the hedge fund Siegler, Collery & Co. in 1993 but the real consecration reached it three years later, with the founding of Greenlight Capital Inc., which he founded together with Jeffrey Keswin.

The company starts with less than $ 1 million in funds but in a few years it grows significantly and in 2017 reaches the sizable figure of $ 10 billion in managed assets.

Einhorn, as well as one of the most famous Wall Street traders is very prepared, graduated with honors from Cornell University and immediately made himself noticed for his incredible intuition and for not letting himself be influenced.

He has always evaluated companies very carefully without being influenced by the brand. If he noticed something “strange” in the fundamental analysis, which did not correspond to the price of the shares, he had no qualms about selling short.

David Einhorn’s comments and statements leave their mark on the markets even if his heritage is certainly not that of Ray Dalio or Carl Icahn.

Yet the “Einhorn effect” is quite popular on Wall Street and these words currently indicate a steep drop in the share price of a publicly traded company, which often occurs soon after Einhorn declares it has opened a short position on that society.

In 2002, this trader had no qualms about publicly stating that he suspected that Allied Capital, a private finance company, had altered the books. The stock collapsed and David, who was doing a short sale, took a hefty nest egg.

Not everyone likes this attitude, and Einhorn has often been accused of “distorting reality” for his own benefit. But others believe his intent is to protect shareholders.

In the next paragraphs we explain how to get all these elements, in a simple and free way.

To better understand the markets and how experienced traders move, you need to see them at work.

Fortunately, there is a fabulous patent that allows you to copy what the most experienced traders do on eToro, one of the most popular online brokers in the world.

eToro needs no introduction, it has exceeded 20 million subscribers and the numerous licenses obtained confirm its reliability and safety.

In Europe this intermediary is regulated by CONSOB and the revolutionary patent we have mentioned is called Copy Trading.

This Broker offers one of the most intuitive trading platforms on the market, which allows you to invest in Stocks, Indices, Currencies, Commodities, Cryptocurrencies, etc. without paying commissions.

But what we have selected this online broker for is its automatic trading system (Copy Trading), let’s see how it works:

Copy Trading will copy on your account all the market operations performed by the traders you are copying, automatically and free of charge.

If you want a diversified portfolio we recommend that you copy at least 5-6 traders, here are some examples:

Learn from a Trading Course

At this point, let’s find out how to get an excellent theoretical preparation without spending anything.

We have reviewed the various trading courses available on the market and have selected the most comprehensive of those offered for free.

It is a Trading Course that has nothing to envy to paid courses. It is an ebook created by the ForexTB Broker and contains all the secrets of online trading.

ForexTB is one of the most popular brokers in the European Union, thanks to a prestigious CySEC license, which protects investors.

The course we are talking about is very detailed. Show the basics of trading and the most effective indicators by explaining everything in simple and easy to understand terms.

With this pdf you can expand your preparation without spending anything, here is the link to download it:

To learn the best operating strategies, it is not enough to see the most experienced traders at work and not even to study the theory. You have to understand how to move on a trading platform.

Fortunately, ForexTB, in addition to the Course, offers Trading Signals made in collaboration with Trading Central.

These are very precise operational indications that provide practical help to traders and allow them to effectively apply the best strategies learned on a theoretical level.

The signals are also free and to receive them just use the official link below:

David Einhorn and the 2008 crisis

David Einhorn’s fame went global when he pointed down against Lehman Brothers in 2007.

Einhorn argued that the American bank had hedged its huge liabilities by altering balance sheets and had been cheating shareholders and customers for years.

After publicly showing his analysis and declaring the “short” position on the title, his skepticism prevailed.

But when the bank announced a nearly $ 3 billion loss following Einhorn’s announcement, many began to change their minds.

Lehman Brothers filed for bankruptcy in September 2008 and effectively kicked off the financial crisis we all know. David Einhorn had foreseen it.

In David Einhorn’s life there has always been little space to write and spread his thoughts, yet in the book “Fooling Some of the People All of the Time: A Long, Short Story” this trader tells the world of hedge funds in a original and transparent.

The book is about his first big short sale, the one against Allied Capital in 2002.

In a public conference he declares that that was his best trading idea than him.

The book details Allied and its fraudulent behavior towards shareholders. This book shows all of David’s indignation towards those who cheat investors.

It is not the usual economics treatise, it is intriguing because it reveals the backstory of Wall Street and shows a cynical and unscrupulous world.

This investment philosophy can be found throughout the career of David Einhorn, who has always balanced investments between bullish and bearish positions, without caring too much about the opinions of his illustrious colleagues.

Thanks to that downward “bet” and a few other secondary investments, the hedge fund has grown 10 times in just a few years.

Unfortunately, short selling has costs and you often have to wait a long time before the long-awaited drawdown occurs. This expectation has led to a sharp reduction in the assets managed by Greenlight Capital.

Total assets under management shrank by nearly half in 2018, from roughly $ 10 billion to $ 5.5 billion within a year!

Clients are struggling to keep up with Einhorn’s persistence in holding short positions against Amazon, Tesla and Netflix and have started divesting.

The market tends to grow, this is well known, and the obstinacy in holding down positions against giants of this magnitude can lead to squandering assets.

But Einhorn thinks he’s right and doesn’t give up. If he is right, Greenlight Capital would probably become the largest hedge fund in the world. But how long will he still have to wait?

David Einhorn’s fight against Tesla and his leader Elon Musk, with whom he often clashed verbally, deserves a separate focus.

Even if Einhorn got some great “Big Shorts” right, it doesn’t mean Tesla will be one of them too. Yet the famous trader does not hear reasons and although the Tesla title continues its upward race, almost undisturbed, David does not give up his “bet”.

In fact, there are many who believe that Tesla is among the most overvalued stocks, but that does not mean that he will collapse in the short term. He could carry on in this speculative bubble for years!

Einhorn is unlikely to hold up for that long, but he’s proud and sure he’s right, so we don’t know if he’ll ever give up.

In the table below we have included the main equity holdings of the Greenlight Capital portfolio. The various bearish bets are missing, which represent an important share of the operations of this hedge fund:

The trading strategy that has always characterized David Einhorn’s operations is called “long-short”.

In practice, this strategy balances bullish positions with others that are bearish. It is Einhorn’s opinion that you can earn as much from buying shares in growing companies as you can from short-selling stocks that are collapsing or are about to do so.

This strategy is very risky even if it can be extremely profitable.

David Einhorn is always looking for undervalued and overvalued stocks, because they allow him (both) to make investments with a high probability of profit. 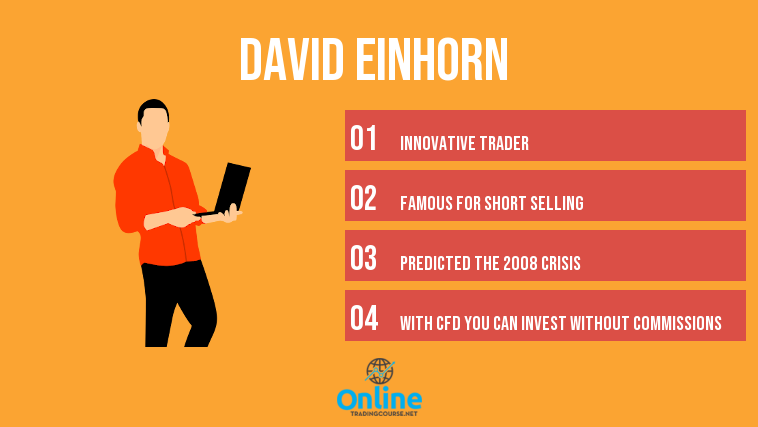 Einhorn’s trading strategy has often been questioned. According to some, the decline in the assets managed by his fund is caused by the stubbornness of the trader, who focuses too much on stocks with solid fundamentals and little on high-growth ones.

On the contrary, it is often common for the latter to point downwards if it believes they are excessively overvalued.

David Einhorn is an out of the ordinary investor but some of his trades could lead him to ruin if he doesn’t decide to change his mind about some bearish forecasts that have lasted too long.

The CFD Brokers that we have proposed to learn theories and operating strategies allow you to aim both upwards and downwards, without paying commissions. So they are the ideal intermediaries to invest like David Einhorn, but be very careful, he has his back covered by a billionaire fund!

Here are the links to access the Demo accounts of the best online brokers:

Who is David Einhorn?

He is a US investor co-founder of the Greenlight Capital fund.

What assets does David Einhorn have?

According to the latest estimates, David Einhorn’s net worth is $ 1.4 billion.

Which strategy does David Einhorn use?

Use the Long-Short strategy, buying undervalued stocks and selling overvalued ones.

Just use a CFD Broker like eToro, which allows you to bet both up and down without paying commissions.