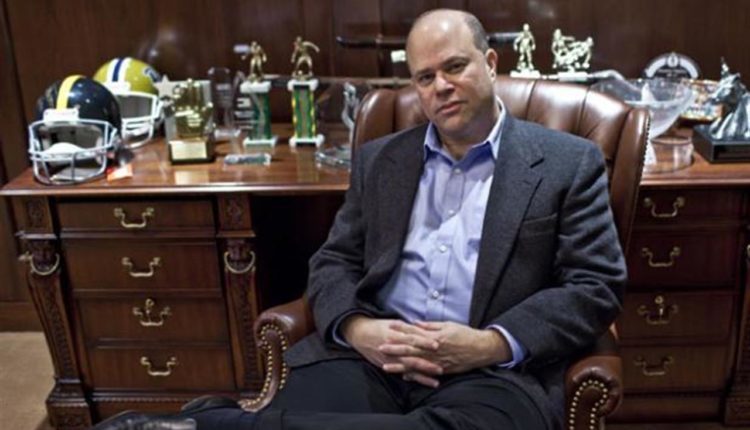 Like many very successful traders, David Tepper has kept a low profile for many years. However, in 2009, he became famous when he made $ 7 billion for his Appaloosa fund and $ 4 billion for himself just as most traders were losing money.

The big investors are noticed precisely during the critical moments of the economy, when most speculators don’t know what to do, they see a profit opportunity.

If you want to follow in the footsteps of David Tepper it is necessary first of all to have a platform to invest. An online broker like eToro, for example, is ideal for trading even starting with small capital, because it is safe and there are no commissions to pay.

Who is David Tepper

Founder and president of Appaloosa Management, a well-known fund among international investors, David Tepper is a legendary trader, surely one of the most famous traders in the world.

Her father was an accountant and her mother an elementary school teacher.

David graduated with honors in Economics from the University of Pittsburgh. He started experimenting in the investment sector from a very young age.

Tepper subsequently graduated from Carnegie Mellon University with a degree in industrial administration.

David Tepper began his career with Equibank, as a credit analyst, in the Treasury Department. He later worked at Keystone Mutual Funds in Boston.

He worked in their New York office as a credit analyst and immediately showed his incredible talents.

David Tepper had the ability to recover companies in difficulty and turn them into profitable businesses. His rise in Goldman Sachs was very rapid.

He was promoted to chief trader in the high yield sector in just six months. Tepper has been with Goldman Sachs for eight long years.

After this “very profitable school” Tepper started his own business, Appaloosa Management in 1993.

The start was with a bang, generating a 61% yield on bonds in difficulty. His ability to sniff out profitable deals and his very reserved character have helped him to accumulate great wealth.

In 2011 David Tepper won the Company of the Year award in the hedge fund industry and was again named one of the 25 most profitable hedge fund managers in 2013 by Forbes.

David Tepper: What platforms to use to invest?

Although many underestimate them, the platforms for investing can greatly influence the results of a strategy that allows you to make money with trading.

First of all, the best trading platforms must have all the tools and indicators necessary to study the graphs and technical analysis, but above all they must not charge commissions, because the commissions can get to totally cancel the profits, especially if you invest small capital.

These commission-free platforms are offered by CFD brokers, which allow you to invest in any market in total safety.

Contracts for difference (CFD) replicate the price of the corresponding security and allow you to bet both upwards and downwards on Stocks, Indexes, Commodities, etc.

Any profits are net, there are no further costs or commissions to be paid later.

Now that we have ascertained the advantages of CFD Brokers, mainly because there are no trading commissions, we must be able to verify that they are safe and reliable intermediaries, here’s how:

In order to follow David Tepper’s advice and strategies, we have two platforms to suggest, both safe and very cheap: eToro and ForexTB.

eToro could not miss among our top picks given its intuitive platform and the automated investment system it offers for free.

The CONSOB, CySec licenses and the over 7 million active users make the idea of a safe and reliable intermediary.

In the eToro platform just choose a security (Stocks, Indexes, Cryptocurrencies, etc.), click on the “Invest” button, decide how much to bet on the operation and whether to buy or sell (short).

But for investors who prefer to rely on the experience of more experienced traders, eToro has patented Copy Trading.

This system allows you to copy the operations performed by the best traders in the world (on eToro), to learn their strategies and obtain the same returns.

Here are the steps to follow to use Copy Trading:

So you will get the same returns as these trading experts (in proportion to the investment), without doing anything.

With this tool, even a novice investor can earn as a trading expert, because he copies his trades!

Do you want to know what returns we are talking about? Here are some examples:

Both “automatic trading” and “manual trading” can also be tested on a free Demo account, without taking risks, with virtual money.

ForexTB is acquiring a great consensus among traders because it aims to make them profitable as soon as possible thanks to free high-level services.

This Broker is authorized by CySEC, which with its license allows ForexTB to operate regularly throughout Europe.

To try to please every trader, ForexTB has made available two trading platforms, both free:

The first free service created to start investors towards the profits deriving from this activity is an ebook trading course. Considered the best on the market, this pdf focuses on the basics of trading and the most profitable strategies and can be downloaded for free from the link below:

In addition to the basics, operational indications are required to earn from investments. ForexTB sends free trading signals to all investors. These indications are the result of the analysis of Trading Central and the winning rate exceeds 70%.

Davis Tepper and the Appaloosa Found

The fund started with $ 57 million in capital and in the first 6 months of activity the fund made 57% returns, an incredible achievement for a newborn fund.

To understand the constant return on investments in shares of the Appaloosa fund, we can say that if we had invested 1 million at the time of its creation, twenty years later it would have become 181.

David Tepper’s investment strategy has always been to find companies in difficulty and put them back together and then sell them profitably.

Appaloosa invests mainly in debt for companies in crisis. His first investment was in a bankrupt steel company, Algoma Steel, which had already brought the books to court.

Tepper bought the steel company’s preferred shares for $ 0.20 and sold them after a year for about $ 0.70.

Obviously Tepper’s investments, like those of Buffett, Paulson or Soros, were not all positive, his fund lost 25% in the collapse of the junk bond market in 2002, but soon recovered in the following years focusing on the usual companies in difficulty and bankruptcy such as Enron, Worldcom, Marconi Corp. and Williams Co.

The investments made in these companies contributed with a 150% gain in the trader’s portfolio.

Another big blow for Tepper were the blue-chips in 2008, which entered a truly dramatic downward vortex.

During the collapse of the subprime mortgages of the same year, however, while almost all his colleagues were selling, David Tepper entered the upside on bank stocks, buying the usual companies in difficulty which in this case were banks.

When these troubled banks were taken over by “bigger fish”, their stocks went up quickly and Tepper made a very good profit.

The most fearful traders were also panic selling stocks of large banks such as Bank of America and Citigroup, Tepper instead was positioned on the upside.

Here is one of the tips for beginner traders that can be learned from David Tepper: Think with your head and don’t follow the flock.

Over the same period, the big investor bought around $ 2 billion in mortgage-backed securities. Appaloosa, when the government intervened to save the banks, made profits of $ 7 billion with a return of 120% net and $ 4 billion in personal gain for Tepper.

Since the 1990s, David Tepper has invested aggressively in economies in crisis, such as Argentina, South Korea and Russia.

These trades returned 42%, 30% and a 30% loss respectively due to the Russian government’s default. But Tepper did not give up, he continued to buy Russian government bonds and eventually recovered with + 60%.

At the base of David Tepper’s investments there are only the facts, the emotions must not influence and we must invest without the trader’s psychology directing the decisions.

For years the Appaloosa fund has returned money to investors, this is because too large a fund can become difficult to manage according to its founder. 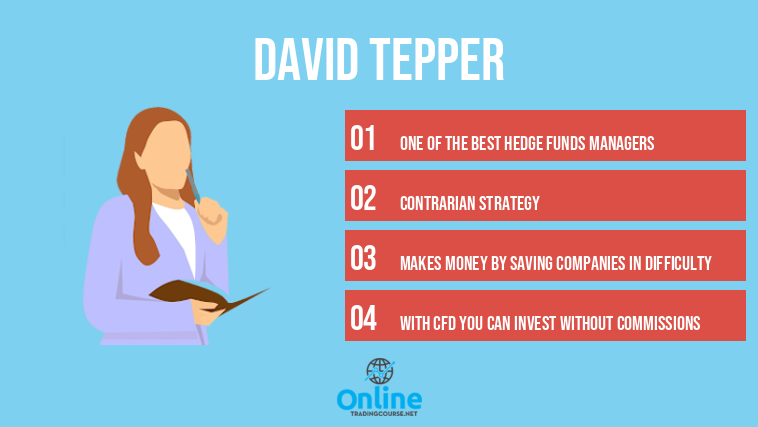 As David Tepper rightly says: It is facts that speak, not emotions.

The facts also speak for this great trader, his results are unquestionable and raise him in the Olympus of the greatest investors of all time.

Tepper’s strategy is not complicated but requires great sensitivity and a lot of experience. Understanding when a company in difficulty can be saved is not easy, but it is there that you make money, it is there that trading becomes really profitable.

Sensitivity must be refined by doing many tests, possibly on Demo accounts, so as not to risk money before being totally masters of the adopted strategy. These accounts are identical to the real ones but the money are virtual and they are perfect for practicing without taking risks.

Here are the links to access the Demo accounts of the best trading platforms that we have reviewed:

Who is David Tepper?

David Tepper is considered the best hedge fund manager of 2009 and one of the best ever.

What strategies does David Tepper use?

David Tepper uses a strategy to rescue companies in difficulty, he puts them back on their feet by earning them.

How does David Tepper invest?

David Tepper does not allow himself to be influenced by emotions, his investments are based only on facts and often does not follow “the flock”.

What platforms to use to follow David Tepper’s strategies?

The ideal trading platforms to put David Tepper’s strategies to good use are CFD Brokers: safe and commission-free intermediaries.

Short Selling: How you make money with