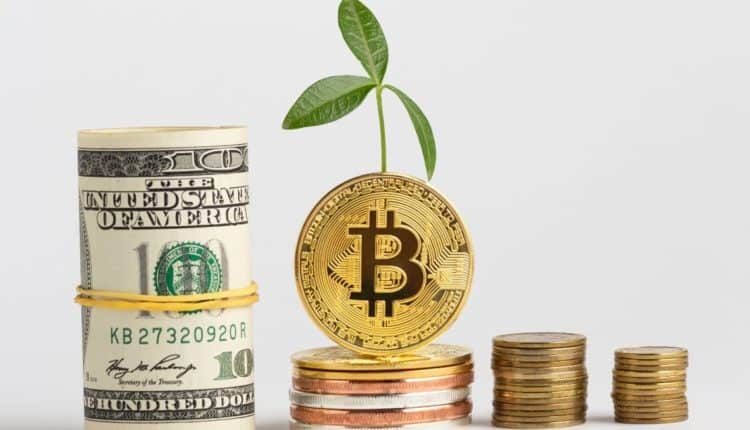 Staking Bitcoin: meaning and how to do it

Many are now interested in Bitcoin staking and staking in general, as a less profitable but more prudent form of investment than the continuous pursuit of cryptocurrency prices.

But what is staking actually? Can it really offer passive income? What are the risks? What needs to be done to get started?

In this guide, we will answer the main questions that haunt investors regarding this topic.

But if you want to know a method of staking offered by a safe and reliable Broker, which does not expose you to the risks of unlicensed intermediaries that rage on the web, eToro is the perfect solution.

Although this financial intermediary has made itself known as a CFD Broker it is much more than that and also allows you to stake some cryptocurrencies:

Staking Bitcoin: what is it?

Before talking about Bitcoin staking we need to take a step back and explain how the blockchain works and where the staking mechanism comes from.

As you know the blockchain is a chain of blocks that cannot be altered once they are approved.

Bitcoin, Ethereum, etc. they are all first generation cryptocurrencies and have a consensus mechanism based on Proof of Work, which we will learn more about in the rest of our guide.

For now, suffice it to say that this method consumes a lot of energy, requires a lot of hardware resources and is quite expensive.

These PoW limitations have led to the development of faster, more efficient and simpler transaction consent systems. One of these is based on staking, which is the simple possession of cryptocurrencies.

Staking Bitcoin means buying BTC and getting a reward in exchange just for holding it.

In reality, the mechanism that governs staking is much more complex and some cryptocurrencies naturally provide for it, while for others the procedure is offered by specialized intermediaries or some cryptocurrency exchanges.

But is there a way to staking using a secure intermediary?

eToro is one of the rare examples of online brokers that allow both to trade through CFDs (Contracts for Difference) and to invest directly in cryptocurrencies and stocks, without paying trading fees.

As you know, this Broker is extremely safe, authorized by various control bodies including CONSOB and allows you to operate in various ways.

With its trading platform you have the possibility to buy Bitcoin directly, or through CFDs using leverage.

Bitcoin does not use the PoS consensus method, so you won’t get a reward just for holding BTC in your wallet.

But there are cryptocurrencies that instead natively use PoS (Proof of Stake) and through eToro you can get a passive income just for buying some of them.

eToro currently allows staking with Cardano and Tron, but it is likely that new cryptocurrencies will always be offered with this type of consensus mechanism.

How to di Crypto Staking on eToro?

You simply have to buy the altcoins that eToro offers for staking, without leverage, directly.

In exchange, eToro will take care of putting to good use the staking mechanism provided for in their protocols and will keep a part of the rewards for the service offered.

The rewards are in the order of a few percentage points a year, you don’t get rich, but it is still a passive income, you won’t have to do anything to get it, just buy the cryptocurrencies that have this prerogative.

Staking is similar to interest on a deposit account, but pays a lot more than your euro account!

The cryptocurrencies staked are your property, eToro only acts as an intermediary for the mechanism necessary to obtain “the rewards”.

Proof of Stake (PoS) is an alternative consensus mechanism to the classic Proof of Work.

Instead of using computing power to solve complex mathematical problems, Proof of Stake uses the simple possession of cryptocurrencies and the network randomly chooses users to validate the next block.

With PoS, decentralization is guaranteed but there is no need to waste electricity and use expensive farms with thousands or millions of ASIC cards that do 24-hour mining.

What is Proof of Work?

Before talking about Bitcoin staking, we need to understand why this new procedure is catching on and how the currently most widespread one works: the PoW.

Bitcoin and other decentralized cryptocurrencies need to be transferred quickly and cheaply to be competitive. Initially, the solution to validate these “cryptocurrency transfers” was to use “mining”.

It is a kind of competition in which powerful computers try to guess the solution to a mathematical problem. Whoever finds the solution first earns the right to validate the next transaction in the blockchain, the so-called “block”.

Obviously a more powerful computer increases the chances of winning this “contest”. Thousands of powerful computers are much more likely than a single person, and decentralization is no longer what the founder of Bitcoin imagined.

Bitcoin mining processes are in the hands of large farms, with thousands of computers dedicated only to that job.

The term Proof of Work indicates precisely the mining, that is the work necessary to find a solution to the mathematical problem.

Although the consensus mechanism based on Proof of Work is considered safe and reliable, it is very expensive in terms of hardware and electricity, moreover there is no true decentralization because the miners are brought together by large specialized companies.

What is Proof of Stake?

These disadvantages have led to the development of alternative consensus mechanisms and the most popular is Proof of Stake.

Instead of using electricity to run computers and try to “win a contest,” people just have to own cryptocurrencies and the rest is determined by chance.

Basically, anyone can stake a certain amount of cryptocurrencies on their computer (which must be constantly connected and switched on) or on a server of a dedicated service provider.

The computer becomes a “node” and participates in a kind of lottery. If the node is active (therefore switched on, connected and with staking cryptocurrencies) it takes part in the lottery. If it is “extracted” it participates in the validation of the famous “block”.

Obviously, also in this case, the probability of being “extracted” is in favor of those who own the largest quantities of cryptocurrencies in staking, but the system avoids the monopoly of the so-called “whales”.

Whoever wins the “lottery”, in addition to validating the block, also gets a reward. This is a small amount of the same cryptocurrency that has been staked.

Staking Bitcoin: is it possible?

As Bitcoin is a cryptocurrency based on the PoW consensus mechanism, it is not possible to staking Bitcoin directly.

Some intermediaries also propose a passive return when you get hold of Bitcoin but we cannot call it staking, it is instead Lending.

Lending provides a reward that comes from lending cryptocurrencies through special platforms.

The returns are similar to those from staking but the risks are much higher.

The system is provided by third-party intermediaries, it is not included in the cryptocurrency protocol, so if the intermediary “fails”, there is the risk of losing all the money invested in the operation.

Considering that the yields are quite low, we are talking about figures that do not exceed 10% per year, it is not convenient to staking Bitcoin but only cryptocurrencies that include it in their consensus method.

And if you keep in mind that by trading Bitcoin, you can get similar returns in just one day, that’s why we advise you to carefully evaluate this type of investment.

The risks of pure staking arise from the fluctuations in the price of the cryptocurrency that you constrain.

Suppose you are staking cryptocurrency X for one year. You will receive your rewards day after day up to a total of 10% (we are making a hypothesis). At this point there are two possible scenarios:

Cryptocurrency trading is undoubtedly more profitable. Staking doesn’t protect you from swings in the price of a cryptocurrency, it just adds a steady return.

To this risk there is also to add that deriving from the intermediary used. As long as you choose eToro you will have nothing to fear but the platforms that offer staking services are almost all unregulated, so be very careful.

Furthermore, there is always the risk of cyber attacks and theft of cryptocurrencies, which are quite frequent on exchanges.

Considering the low return of Staking, it is not worth taking further risks using an intermediary who does not have at least a CySEC or CONSOB license.

We have already mentioned what the gains can be from staking Bitcoin or any other formula of staking, direct or indirect.

The percentages of annual return range between 10% and 30% for pure staking, such as that offered by eToro on Cardano and Tron, while they drop for indirect staking (Lending).

Staking Bitcoin (we should actually call it Lending) using platforms that offer rewards for holding BTC rarely offer percentages higher than 10% per annum.

The returns from staking can be fixed or variable, it depends on many factors, but it is necessary to constrain the cryptocurrency for a certain period of time to get a noteworthy reward.

If you really want to stake, we advise you to use the pure (direct) one and to choose only regulated intermediaries such as eToro.

Let’s now try to answer one of the most frequently asked questions:

Can Bitcoin staking be convenient?

It depends on what kind of investor you are. If you bet on long-term BTC and have a wallet with cryptocurrencies that you never move, staking can offer you an additional yield.

As you know, Bitcoin does not have PoS but uses PoW so it cannot be staked directly. However, there are intermediaries that allow you to make your Bitcoins “pay off” by offering them on loan.

In this case we are talking about Lending. You don’t have to worry about not getting your BTC back, platforms only lend them against collateral from the bond of other cryptocurrencies, but there is still a percentage of risk, especially if you use unlicensed intermediaries.

If you do high-frequency online trading, Bitcoin staking doesn’t make much sense.

A day trader looks for returns every day similar to what he could get by staking in a year! At this point it is not convenient to bind your cryptocurrencies but to exploit them to do online trading in the short term.

To reduce the risks, as we have repeated several times, do not trust unlicensed intermediaries. Choose eToro or another cryptocurrency broker with at least a CONSOB, CySEC or FCA license, such as those listed below:

What does staking mean?

It means getting a reward for holding cryptocurrencies. It is a return that comes from simple possession. To stake, the cryptocurrency must include the consensus mechanism known as PoS.

What are the risks of staking?

Risks arise from the volatility of cryptocurrency prices which can nullify the returns of staking. Furthermore, there are the risks that arise from the intermediaries used.

Not direct staking, Bitocin provides the Proof of Work mechanism and not the Proof of Stake. But there are brokers who offer passive returns for holding BTC as well.

If you are a long-term investor, yes, otherwise cryptocurrency trading, when performed on reliable platforms such as eToro, is much more profitable.

Buy Celo: how to invest in this Crypto [Guide]

Altcoin: Meaning and Price of the Best Cryptos

Buy Chiliz: how to invest in CHZ [Guide]